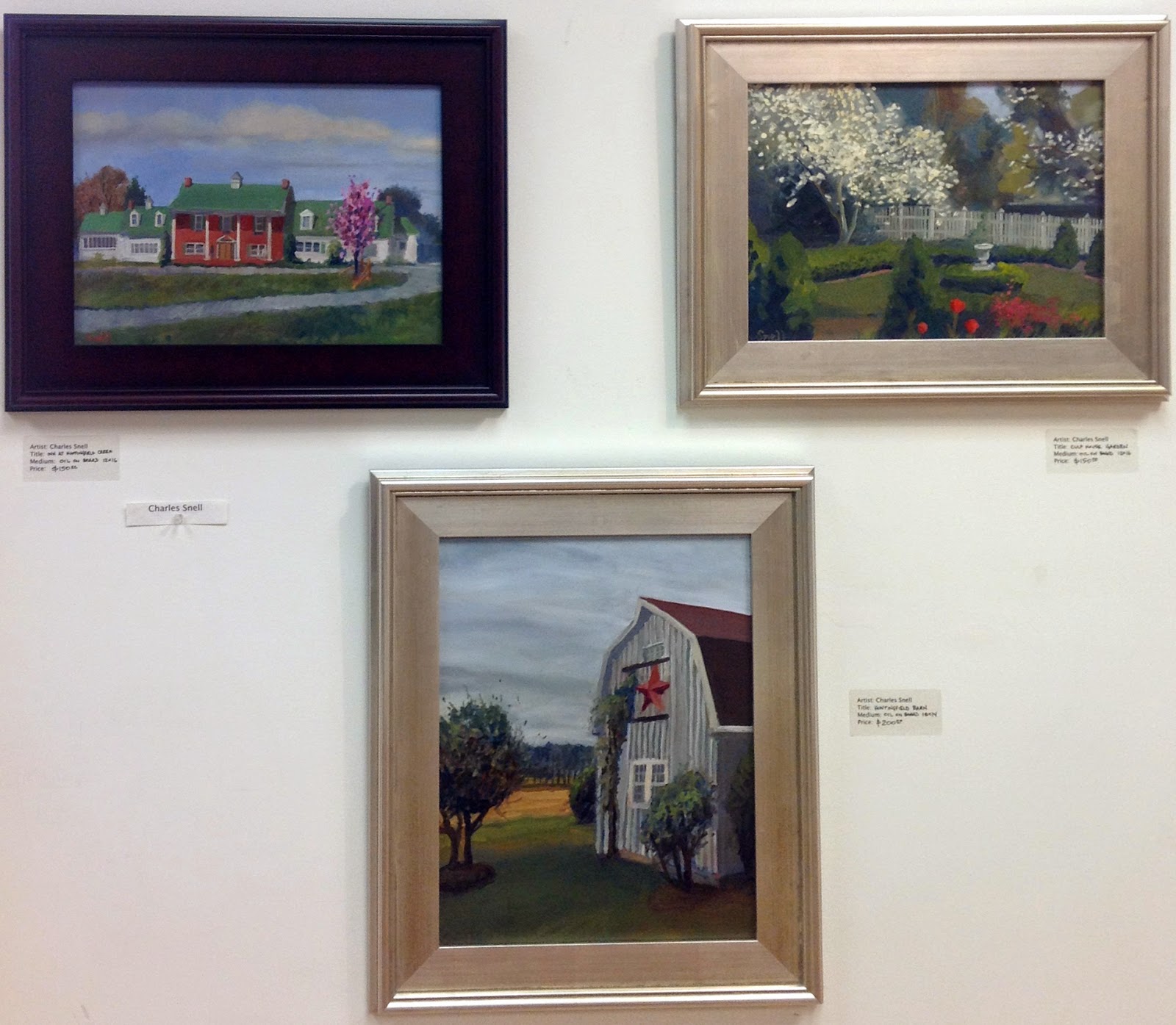 The fifth annual "Paint the Town" plein air event in Chestertown, Maryland concluded this weekend.  I was one of 45 artists participating in this event, which began on Thursday.  The photo shows my entries in the exhibit, all of which were painted en plein air.  At upper left is a 12" x 16" oil painting, "Inn at Huntingfield Creek."  To the right is another 12" x 16" oil painting, "Culp House Garden."  At the bottom is an 18" x 14" oil painting, "Huntingfield Barn."  During the exhibit, "Culp House Garden" sold.  The event was sponsored by Chestertown RiverArts.  Paintings (c) 2014 Charles Snell.
Posted by Charles Snell at 6:28 PM No comments:

Email ThisBlogThis!Share to TwitterShare to FacebookShare to Pinterest
Labels: EN PLEIN AIR, LANDSCAPE, OIL ON BOARD 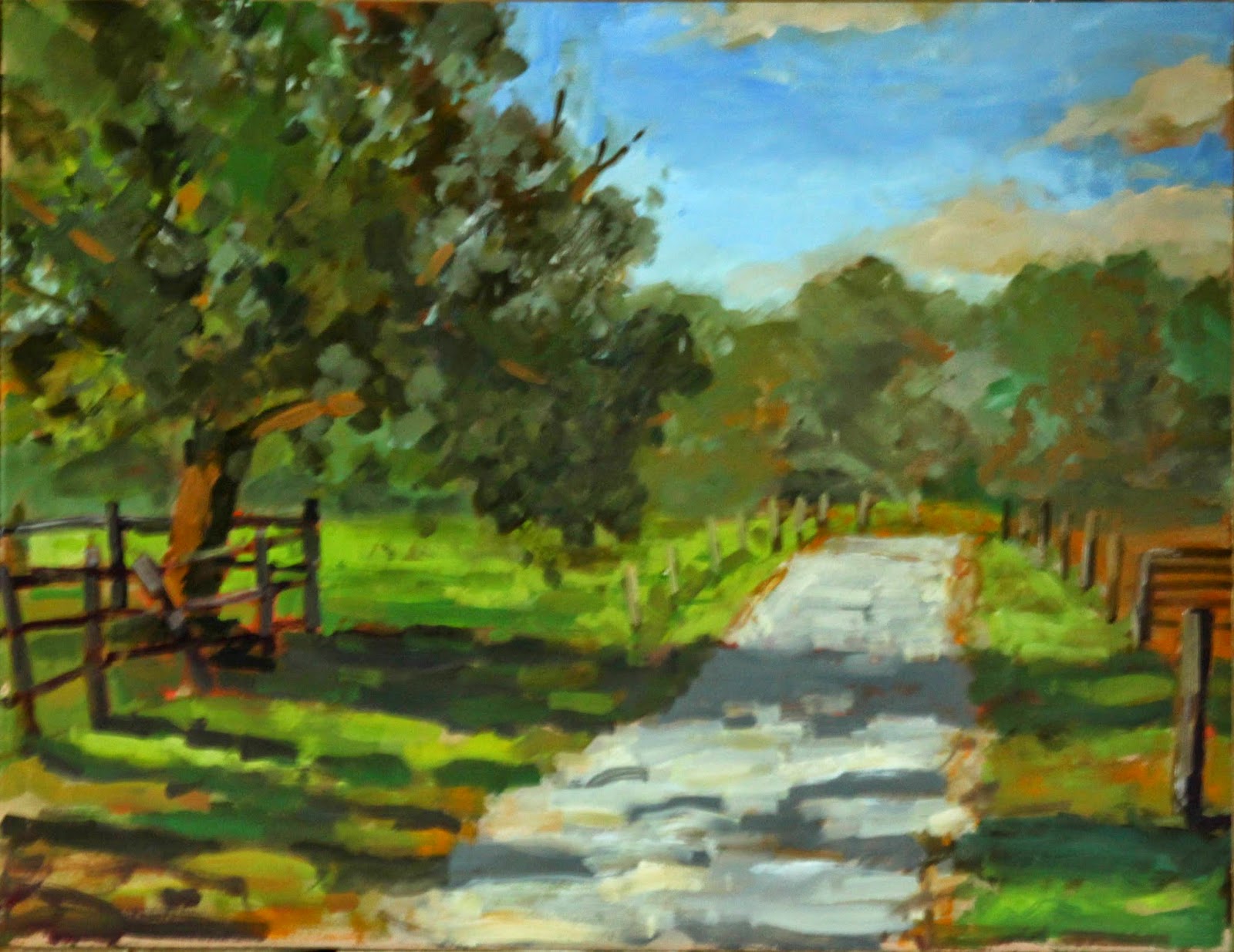 Posted by Charles Snell at 7:59 AM No comments:

Email ThisBlogThis!Share to TwitterShare to FacebookShare to Pinterest
Labels: 12 IN x 16 IN, EN PLEIN AIR, LANDSCAPE, OIL ON BOARD

Bailey's on the Rocks

Posted by Charles Snell at 4:06 PM No comments:

Email ThisBlogThis!Share to TwitterShare to FacebookShare to Pinterest
Labels: 12 IN x 16 IN, NFS, OIL ON BOARD

Today I completed in the 7th annual Plein Air Competition in Hammonton, sponsored by the Noyes Museum of Art.  There were over twenty artists participating.  The weather was fair but a little bit windy.  I kept enough ballast on the easel and did not have a problem with the easel falling over!

I submitted two paintings.  The first one was done at the intersection of South 2nd Street and Grape Street.  I found some sunlight hitting the front of a house and started painting at about 9 a.m.  I used some acrylic ink for sketch, followed by addition of values using the largest brush possible.  I wanted to grab the shape of the light quickly.  Here is the reference photo: 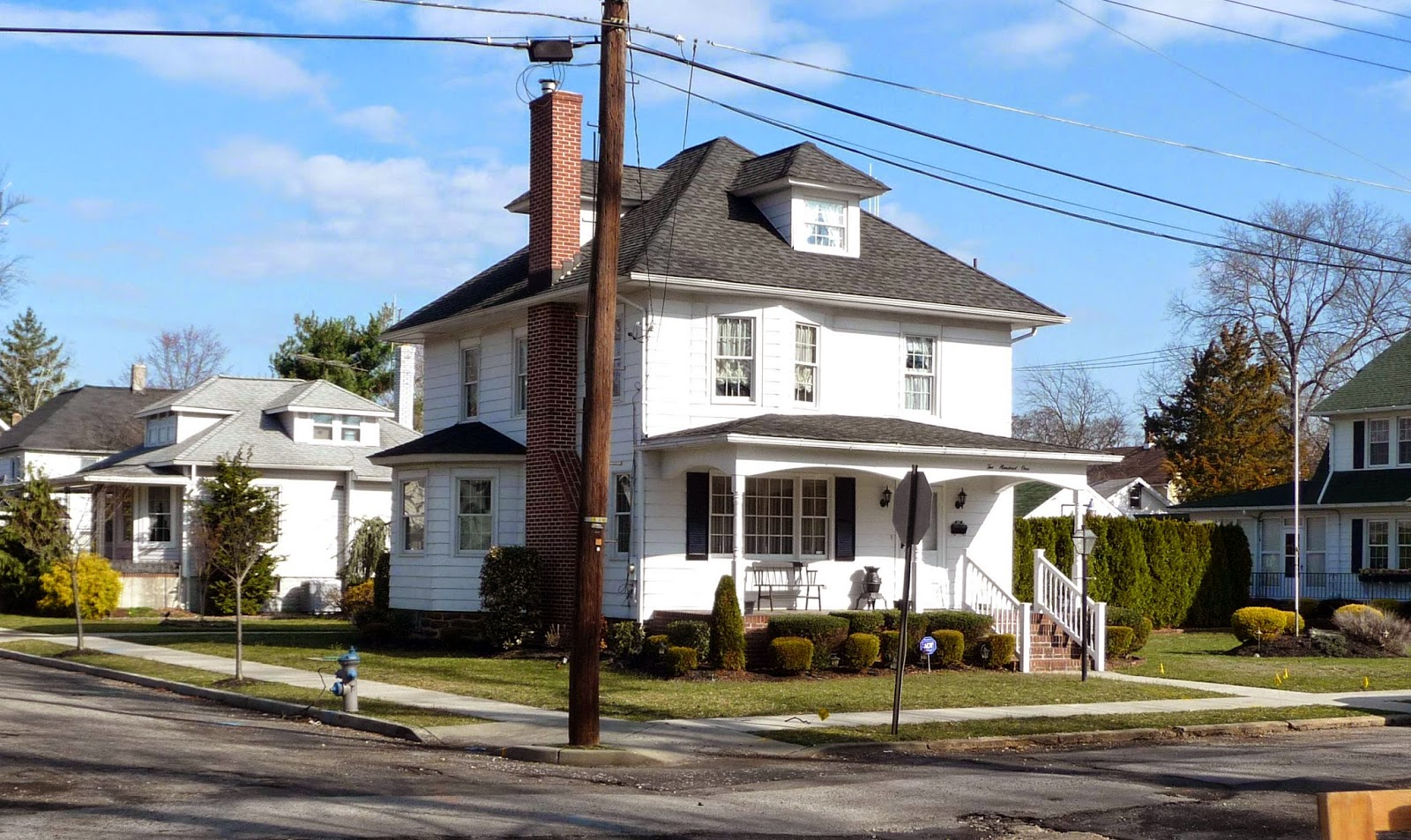 The following photos are some shots of the work in progress.  The ink used in sketching (red) drips down but gets painted over later.  After looking at these photos I see there is need for some adjustments - one of the windows is tilted and I managed to separate the sky into two pieces with the chimney... In addition to the issue of making the whole structure too narrow! 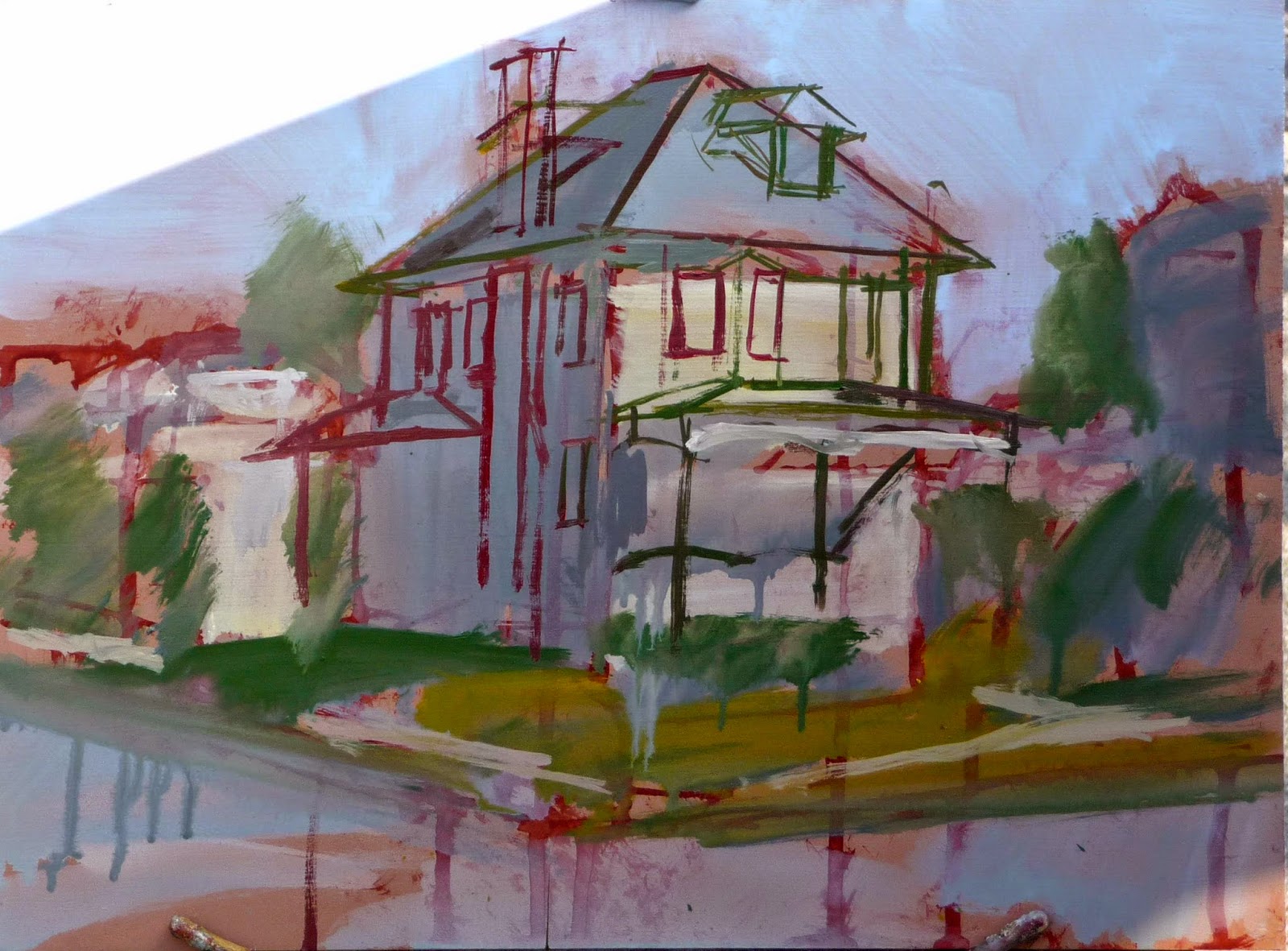 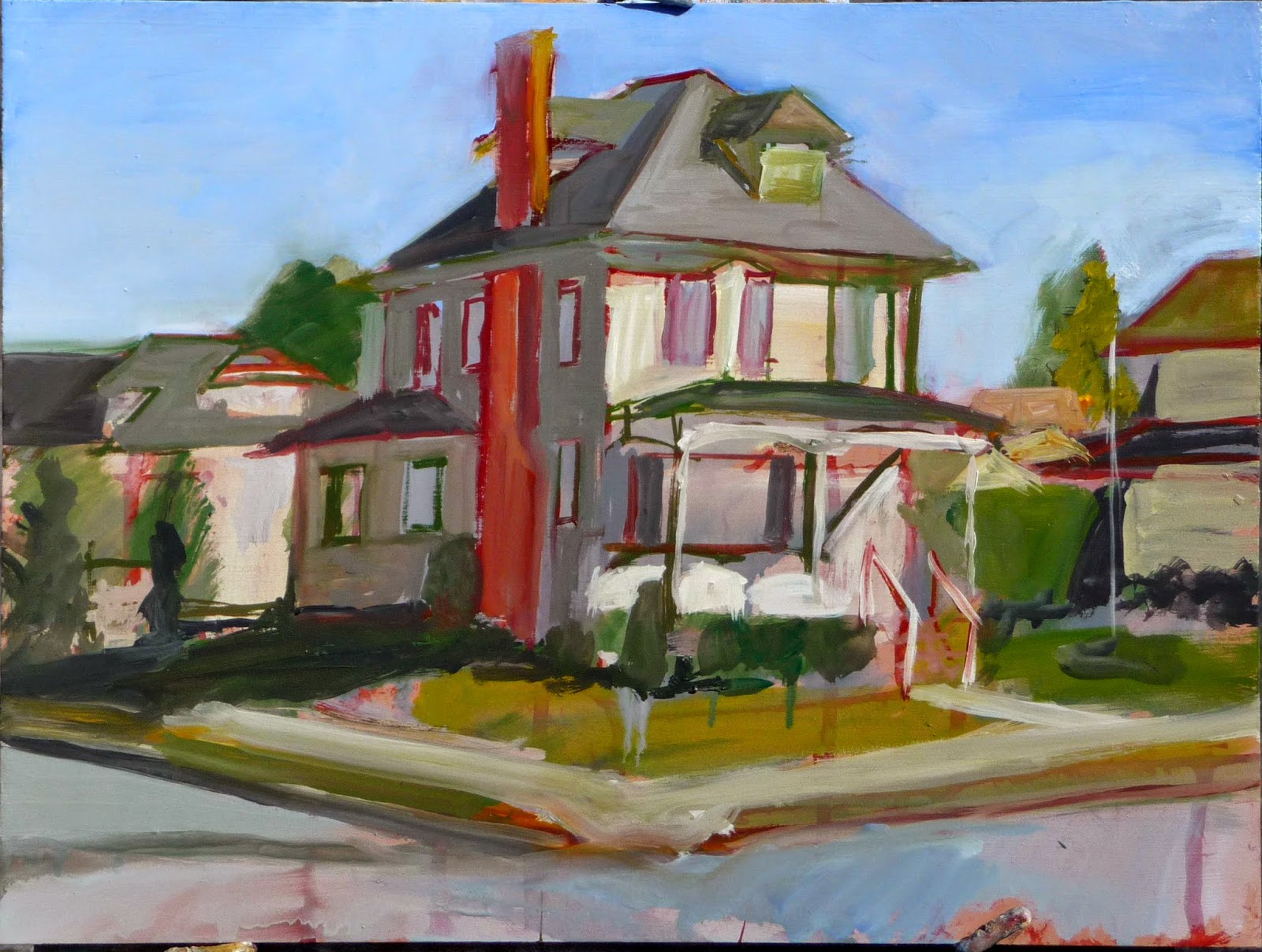 The following images show my two framed paintings on display in the Hammonton Arts Center.  The works submitted for the plein air competition will be on display there until April 26, 2014.  Use the link provided above to get the phone number for HAC.  The second painting was completed in the afternoon in about two hours.  I set up my easel on Bellevue Avenue for the second painting.  All images (c) 2014 Charles Snell.


Posted by Charles Snell at 7:51 PM No comments:

View my complete profile
Since 2007, I have been painting on a regular basis. Usually I paint in oils, but sometimes watercolor. Most of the time my subjects are either landscapes or still life. Whenever possible I paint en plein air.